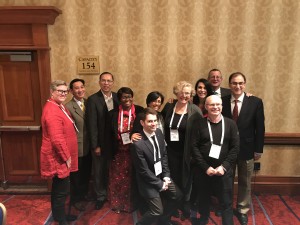 SIOP supported the nomination of pediatric oncologist, Tezer Kutluk, to join a new NCD Alliance Board. The nomination was successful and we look forward to Dr. Kutluk bringing the voice of children with cancer and their families to this important global initiative.

SIOP continues to collaborate with Sanofi Espoir Foundation and My Child Matters Grants for Nursing. Plans are now in place for a call for 5 nursing grants in 2018 of €10,000/each. We remain grateful for the extraordinary support of this foundation and their commitment to improve the care of children with cancer worldwide.

In July 31, 2017, the Advocacy steering group updated WHO non-State Actors Report and SIOP Workplan submitted for application to become recognized as NGO in official relations with WHO. Great thanks due to our WHO technical officer Dr. André Ilbawi and our partners in all WHO-related work—World Child Cancer, St Jude Children’s Research Hospital, The Aslan Project, We are looking forward to the outcome of the application in spring 2018

Several SIOP members are participating in the Lancet Oncology commission activity to perform a comprehensive analysis to develop an investment case for funding the management of childhood cancer across low- and middle-income countries.

We are very grateful for all the support of the SIOP membership to advocate for children with cancer on the global level.

Gabriele Calaminus and Julia Challinor for the SIOP advocacy group