Aside from New Zealand and Australia, all countries in Pacific Polynesia and the Western Pacific are LMICs, with limited access to complex health care services. But with the progressive improvement in the health of Pacific children over the last 2 decades, childhood cancer has begun to emerge as a significant health care issue. However, with limited resources for the diagnosis and treatment of cancer, the development of cancer care for children presents a major challenge to both health services and health care professionals.

The first Pacific Regional Child Cancer Conference, which was held recently in Fiji (1-2nd December, 2016) was an opportunity to bring medical and nursing staff together from across the Pacific for the first time to discuss the care of children with cancer in Oceania.

Sponsored by the New Zealand National Children’s Cancer Network (NCCN), with financial support from World Child Cancer (NZ Charitable Trust) the meeting was attended by 72 medical, nursing and parent delegates from 12 Pacific Countries. The meeting was Chaired by Dr Scott Macfarlane (Auckland) and the program was developed by the New Zealand Pacific Working Group (Chair, Dr Jane Skeen, Auckland). We were delighted to have the Hon Rosy Sofia Akbar, the Fiji Government Minister of Health, address the opening, and have international representatives from the WHO, SIOP, and CCI.

The meeting opened with “stock-take” presentations from delegates of each country on child cancer care in their region. Several countries (Fiji, Samoa and Tonga) have established cancer care programs over the last 7 years, (supported by active twinning from New Zealand Paediatric Oncology Centres), but they all face ongoing challenges to sustain and develop their services, to train and retain medical and nursing staff, and to support families. Papua New Guinea (see below) began a pilot child cancer project 3 years ago and is now developing dedicated cancer care in Port Moresby. A pilot child cancer program begun recently in East Timor, but several other countries, in particular, Vanuatu and the Solomon Islands are yet to begin pilot programs.

The country updates were followed by workshops where regional delegates met and shared their ideas on how to develop cancer care using the SIOP PODC framework. Representatives from CCI, the New Zealand Child Cancer Foundation and the WOWS foundation ran a parallel program for regional parent groups, and separate workshops focused on the development of palliative care and cancer nursing.

Clinical leaders from the twinning partners in New Zealand and Australia presented disease specific updates on the diagnosis and treatment of child cancers according to the Pacific Islands Adapted Treatment protocols. There was also a demonstration of the Pacific Children’s Cancer Registry which is planned to go-live as a pilot project in Fiji later this year.  The meeting concluded with a session where the common themes and challenges were summarized and future actions identified. It was agreed a further meeting would be in 2018.

Aside from the meeting content, the meeting was a great venue for medical, nursing and parent groups to network and develop new collegial contacts. 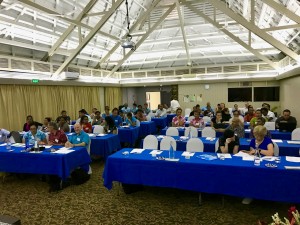 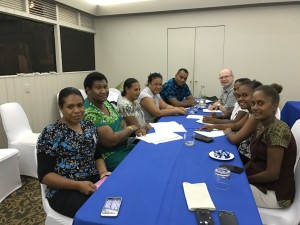 Papua New Guinea (PNG) is the largest country in the Western Pacific with a population of 7.6 million, almost half of whom are less than 15 years of age. PNG is a country rich in mineral resources, and over the last 15 years there has been a rapid rise in the Gross National Income, but over 70 % of the population live in remote rural regions; many in mountainous villages with limited or no road access. The major child health issues remain communicable diseases (pneumonia, diarrhoea, malaria and Tb) and malnutrition. However, the implementation over the last 2 decades of the WHO SDGs, and the WHO Integrated Management of Child Illness (IMCI), combined with measures to control Malaria and universal immunisation, has seen a steady and progressive improvement in the health of children in PNG.

Like many other LMICs, the gradual improvement in child health in PNG has seen childhood cancer emerge as an important unmet health care need. But the resources in PNG are limited, the country has limited diagnostic pathology and radiology services, there are no trained Paediatric Oncologists and only a single Cobalt radiotherapy machine for the entire country. We estimate there will be 250-300 new cases of childhood cancer per year in PNG, but at present < 40 are diagnosed, and many present very late with very advanced and incurable disease.

Dr Gwenda Anga, a very experienced General Paediatrician, was seconded to RCH for a year (2014-2015) to gain experience in the diagnosis of child cancer and to develop treatment protocols adapted to the local resources. These protocols were based on the evolving SIOP PODC framework and adapted from the Pacific Islands protocols.  In early 2017, Julie Melo, a senior nurse from PMGH was seconded for 4 months to RCH, where she focused on the role of nursing in the patient journey, and the role of the nurse coordinator in supporting cancer care. Following Dr Anga’s return to PNG, weekly twinning teleconferences between PNG and Melbourne have been held to discuss all new cancer diagnoses and support the ongoing treatment according to the PNG adapted protocols. Specific measures (“the PNG pre-phase”) have been developed to control disease progression and treat comorbidities such as co-infection and poor nutrition prior to commencing definitive cancer treatment. This approach appears to decrease early treatment related mortality and improve overall outcome, but evidence for this awaits the outcome of a future research project.

With the support of her hospital and the PNG Ministry of Health, Dr Anga’s PNG program has now progressed beyond a pilot phase and we were delighted when a dedicated 12 bed children’s cancer ward was recently opened at Port Moresby General Hospital. With further advocacy from Dr Anga and SIOP, the PNG Ministry of Health has also agreed to the supply of the SIOP Essential Cancer Medicines list.

With these measures, more children in PNG now have access to cancer care and referrals to PMGH are now coming from across the country. The next challenges are the development of the multidisciplinary team, the training of additional medical and nursing staff and the development of family support in anticipation of growing demand for child cancer care.