The SIOP PODC has been quite active since the SIOP Annual Conference in Cape Town, South Africa. Our 10 current working groups include: Abandonment of Treatment, Adapted Treatment Regimens, Education and Training, Essential Drugs, ICCCPO and Parent Support Groups, Nutrition, Nursing, Palliative Care, Supportive Care, Twinning, Collaboration and Support. We have four Task Forces: the SIOP Africa/PODC Collaborative Wilms Tumour Project, The Hospital Detention Task Force, the Psychosocial Task Force and the Integrative Medicine Collaborative. Currently, there are 195 members on the SIOP PODC group on cure4kids and 44 countries are represented.

The SIOP PODC co-chairs, Ramandeep Arora and Julia Challinor have been working with the SIOP Board to streamline PODC-relevant information and opportunities within the SIOP Congress Handbook. Members of PODC will be solicited to nominate themselves for a position on the Scientific Programme Advisory Committee (SPAC), which helps create the scientific program of the annual meeting and reviews submitted abstracts. We think this will provide expertise that is needed as more and more abstracts are submitted from low- and middle-income professionals. We are also actively looking for financial support for LMIC co-chairs of SIOP PODC to be able to attend the annual Congress.

The “Second International SIOP-PODC workshop on Nutrition in Children with Cancer” was held recently on 6-7th February, 2016 at Tata Memorial Hospital in Mumbai, India with additional support from CanKids-Kidscan, & Cuddles Foundation. The meeting was attended by 229 participants from more than 60 centres in India. A total of 43 nutritionists from 32 centres in India participated in the fellowship training as well. In addition, a special issue of Indian Journal of Cancer was released with manuscripts by faculty, Indian centres’ data on more than 6000 children, and an editorial on impact of India capacity building model across the globe. SIOP-PODC facilitated the formation of  a national group for childhood cancer nutrition composed of 8 organisations and more than 50 members called “POSHAN” (Pediatric Oncology Stakeholders for Holistic Assistance in Nutrition), which also means “nutrition” in Hindi,  with the objective of systematically and collectively working on nutrition in children with cancer across all stakeholders, and collaboratively with other organizations in India.

The SIOP PODC Hospital Detention Task Force has recently published a position statement in Lancet Oncology (Aug 2015), “Hospital Detention Practices: Statement of a Global Taskforce”. A survey is being designed to determine physician perspectives and global networking is on going to generate awareness and impact of detention.

The SIOP PODC Essential Drugs Working Group had a successful meeting on Day -1 at the Annual Congress in Cape Town. Stakeholders from multiple categories attended the meeting to address the lack of access and quality control for chemotherapy and supportive medication in most LMIC. The working group is exploring opportunities with WHO/UICC/ASCO/NCI/CCI/WCC etc. on production/drug quality/affordability/and accessibility led by working group members and striving to create a global coalition. A publication on drug shortages and prices was written by Ronnie Barr and Jane Robertson, “Medicines for Cancers in Children: The WHO Model for Selection of Essential Medicines” Pediatr Blood Cancer 2015 (DOI 10.1002/pbc.25564).

Finally, SIOP PODC and CCI are collaborating in Dublin for the annual Congress on a Global Stakeholder Village symposium on Day +3 (October 22). The focus of this symposium will be to bring together international NGOs, professional groups, and health professionals working in LMIC on service delivery models, cancer registries and palliative care. The afternoon of the same day will have a full 3-hour “Workshop on Ethical Dilemmas and Moral Distress in Global Pediatric Oncology” led by a team from Texas Children’s Hospital.

Julia Challinor, co-chair is now working with the SIOP Advocacy Task Force, which is striving (together with Childhood Cancer International [CCI]) to gain WHO recognition. This is a years-long process, however, current activities include the formation of a WHO Steering Committee and several planned workshops on childhood cancer in Ghana (completed), Ethiopia, Myanmar, Kazakhstan and Fiji. Members of SIOP PODC and CCI are involved in all the workshop preparations in collaboration with WHO local representatives.

Future plans include the updating of the SIOP PODC website and creation of impact measures to determine if the PODC working groups are making a difference in LMIC and if so, what specific areas of improvement can be documented and tracked. We look forward to SIOP 2016 in Dublin, Ireland. 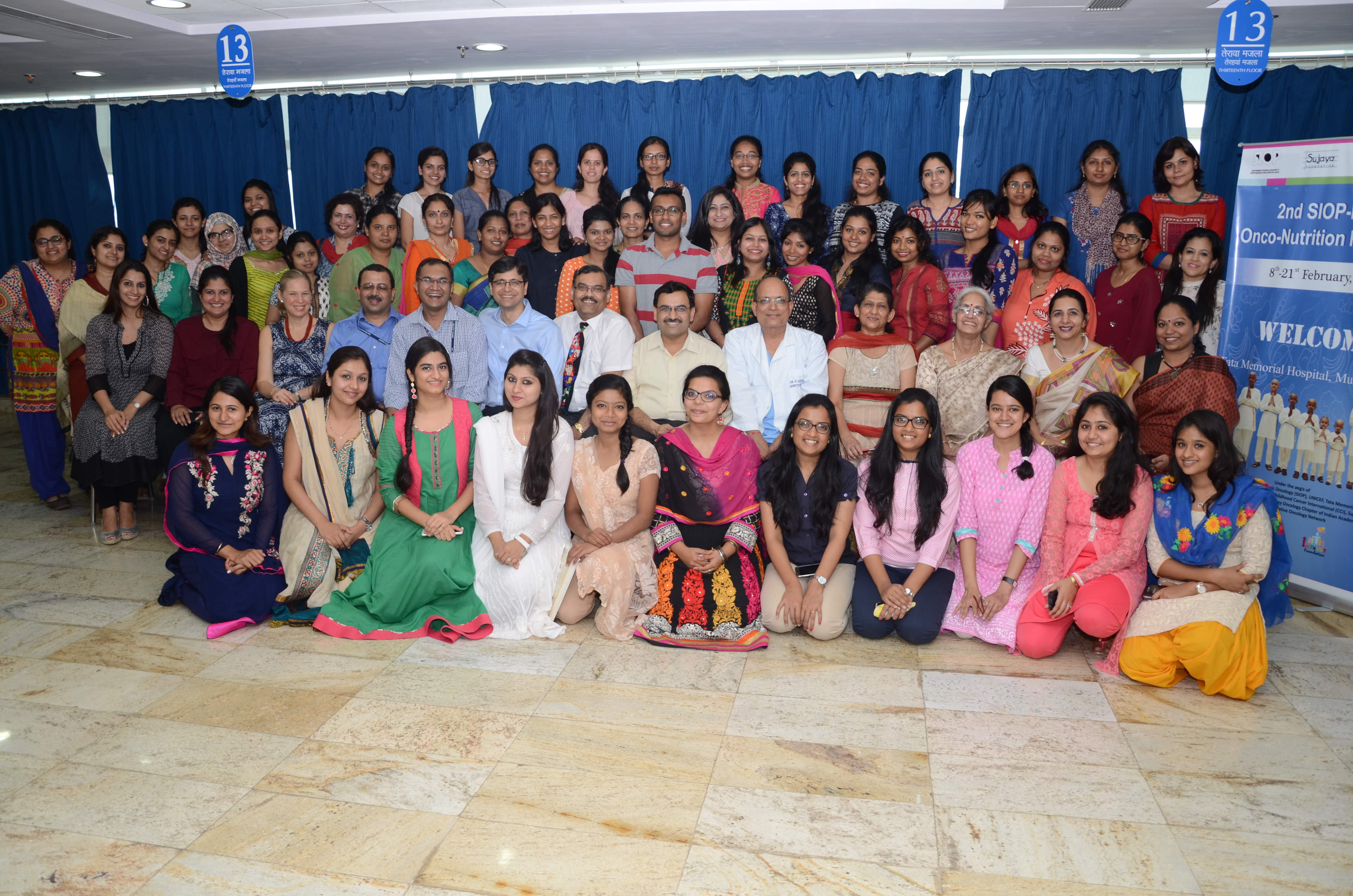 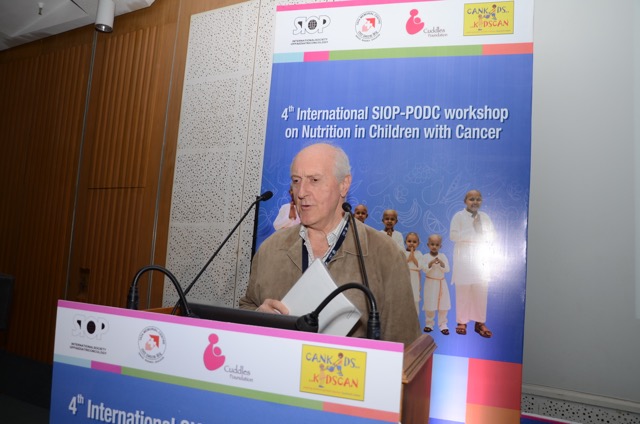 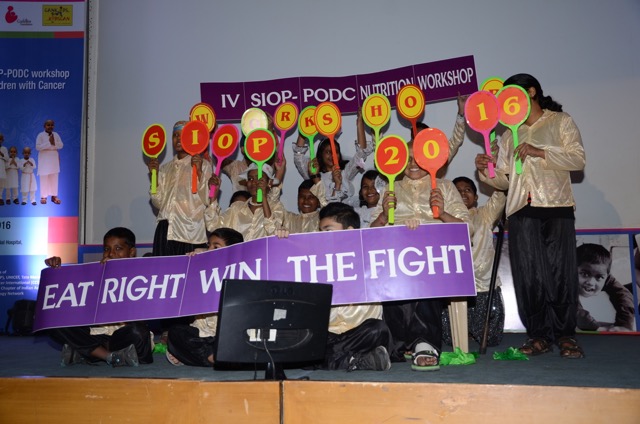 SIOP-PODC nutrition working group was formed recently in October, 2013 during SIOP meeting at Hong Kong to address the unmet need of development nutritional supportive care in low-middle income countries (LMIC). In a short time, the group has generated lot of interest and currently has 93 members from 23 countries. Prompted by the findings of SIOP-PODC international survey that access to nutritional resources and lack of education of staff was the most important barrier to the delivery of nutritional care in LMIC, nutrition Working Group prioritized global capacity building as it foremost objective through the conduct of educational workshops and training programs across the globe starting with India which has one of the highest rates of malnutrition. The group has made significant progress in its efforts through the following initiatives;