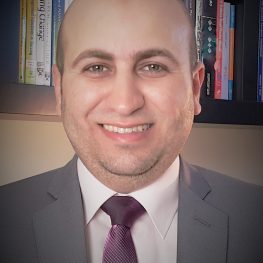 Mohammad R. Alqudimat is a Ph.D. candidate at Lawrence S. Bloomberg Faculty of Nursing, University of Toronto. Mohammad received his undergraduate degree and his Master of Science, clinical nurse specialist stream, from the University of Jordan, in Amman, Jordan. Mohammad started his nursing career in 2005 as a pediatric oncology nurse at King Hussein Cancer Center in Jordan. After receiving training in the field, Mohammad became one of the first clinical nurse coordinators in Jordan to provide pediatric oncology care based on the Strong Model of Advanced Practice Nursing Model (Ackerman et al., 1996; Alqudimat et al., 2009). In 2010, Mohammad developed an evidence-based practice unit at King Hussein Cancer Center that focused on developing care standards based on evidence. He led that unit for two years. In 2012, Mohammad assumed the role of director of outreach nursing at St. Jude Children’s Research Hospital, USA. Then, he moved to Saudi Arabia in 2014 and worked as an associate director of nursing services (acting director) before moving to Canada. In 2020, Mohammad assumed a voluntary/unpaid leadership role as a Co-chair of the Traditional and Complementary Medicine (T&CM) working group as part of SIOP Global Health Network.

In 2022, Mohammad was also elected to serve as a member of the SIOP nursing network steering group for a three-year term.