The European Society for Paediatric Oncology (SIOP Europe or SIOPE), is the only pan-European organisation representing all professionals working in the field of childhood cancers.

The European Society for Paediatric Oncology (SIOP Europe or SIOPE), is the only pan-European organisation representing all professionals working in the field of childhood cancers. With more than 1,600 members across 34 European countries, today SIOPE is leading the way to ensure the best possible care and outcomes for all children and adolescents with cancer in Europe.

SIOPE was established in 1998 as SIOP European branch. In 2007, following the revision of its Statute SIOPE becomes an independent organisation. Read more

SIOP Europe was present at the first plenary meeting of the new European Parliament in Strasbourg, France. It was an important opportunity to initiate contact and collaboration also with the newly elected MEPs who we hope will become the champions of the paediatric cancer cause in the next 5 years.

The European Parliament is one of the main co-legislators of the European Union together with the Council of the EU and the European Commission.  MEPs have an important say in shaping policies of high relevance to paediatric cancer, such as Horizon Europe, the Health Programme, the Clinical Trial Regulation, the Data Protection Regulation, the Cross-Border Healthcare Directive, and the Pediatric Regulation, among others.

SIOP Europe anticipates highly pertinent EU policy developments in the next 5 years and we look forward to working with MEPs from across Europe to achieve our vision of Zero Deaths and Zero Late-Effects in line with the SIOP Europe and CCI Europe Manifesto.

Together with all our partners, including CCI Europe and PanCare, we are committed to working with the incoming European legislators to meet the challenges that greatly impact children and adolescent cancer patients and survivors’ lives.

The 2018 Mazzucato Report for the European Commission outlined a mission-oriented approach for the next EU Framework Programme for Research and Innovation. The recent confirmation that cancer will be the topic for the health mission area 2 is very welcome and we strongly believe this should include a mission to beat childhood cancers.

The article can be directly accessed free of charge from The Lancet Oncology.

JARC (Joint Action on Rare Cancers)* Book is OUT!

The JARC Book is an outcome of a 3-year collaborative project and contains 10 chapters for policy makers. Each chapter presents targeted policy recommendations on rare cancers, including a dedicated section on specific priorities in childhood cancers, which are all rare.  The JARC Book is now available! To receive a copy of the JARC Book, please send an email to: office@siope.eu

SIOP Europe strives to raise awareness about childhood cancer all year round and especially in September as it is a special time in our community as we increase our efforts and activities to support children and young people with cancer.

We are delighted that 31 current Members of the European Parliament (MEPs) from 17 countries showed their support to the paediatric cancer cause, also by wearing the SIOP Europe Gold Ribbon pin and sharing their photo on Twitter using the hashtags #ChildhoodCancerAwarenessMonth #GoGold.

We continue to encourage other MEPs to support the Childhood Cancer Policy Priorities. 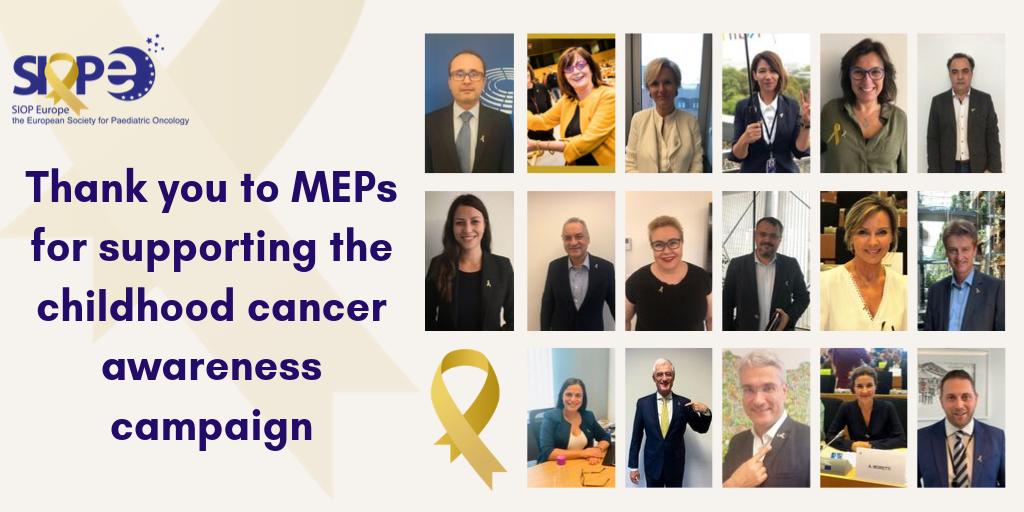 ESO and SIOP Europe have joined forces to offer a Paediatric Fellowship Programme for young paediatric haematologists and oncologists aiming to gain clinical experience at renowned centres across Europe.

The aim of the programme is to support the education of young and promising paediatric haematologist or oncologist to develop their careers in cancer care. The programme familiarises the trainees under supervision with all paediatric haemato-oncology disease types and instructs them in diagnostics and therapy. Successful applicants will be able to spend a defined period of time (3-6 months) at a centre of excellence in Europe where they will gain more knowledge in paediatric haemato-oncology and experience in a multi-disciplinary clinical setting specifically designed to address their needs. Currently, five centres are offering these paediatric oncology fellowships.

The SIOP 2019 Congress once again brought together a broad spectrum of stakeholders involved in the care of children and teenagers with cancer from all around the world to share experience and results. SIOP Europe was once again delighted to take part in this unique event, attend sessions/meetings and interact with members of the global community at the joint SIOP-SIOPE booth in the exhibition area.

These groups are currently preparing an enticing programme for the SIOP Europe 2020 Annual Meeting in Valencia.  The groups are also developing various projects, taking parts in meetings and engaging with the community.

The ACCELERATE Paediatric Oncology Conference is an important and much needed meeting that brings together a wide variety of stakeholders to discuss and seek ways to address specific overarching issues to improve the outcome for children and adolescents with cancer through the development of innovative anticancer medicines in a timely fashion.

The Preliminary Programme is online and participants are encouraged to register as early as possible.  Capacity is limited and places will be assigned on a first come first served basis.

SIOP Europe will once again mark the International Childhood Cancer Awareness Day through an event kindly hosted by MEP Patrizia Toia on 18 February 2020 at the European Parliament in Brussels.

The European paediatric and oncology community, together with parents/patients/survivors representatives, invites the new European Parliament to sustain and reinforce its support of the paediatric cancer cause.

Register here and join us to tackle childhood cancers in Europe!

The 2nd SIOP Europe Annual Meeting, held in partnership with CCI Europe’s 11th Annual Conference, is scheduled to take place on 4-8 May 2020 in Valencia, Spain.

The meeting will provide a distinct opportunity for participants to share their knowledge, collaborate on cutting-edge research and debate the outcomes of the high quality clinical and basic research carried out in Europe, as well as provide mentoring and training for young doctors and fellows.

The 8th edition of the ESO – SIOPE Europe Masterclass in Paediatric Oncology will take place on 6-11 June 2020 in Bucharest, Romania.

This clinically-oriented educational programme has been designed for young paediatric oncologists, who wish to improve their skills in clinical management of common childhood tumours. It is designed to offer a unique learning experience, providing practice-oriented training and the teaching sessions will focus on the application of the most recent research findings to clinical practice.

The SIOPE Staff and Board members would like to express their genuine gratitude to former Presidents: 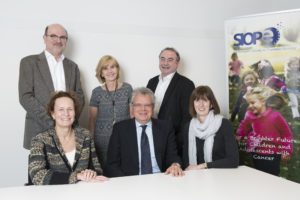 EW YEAR, NEW OPPORTUNITIES! We hope you had an amazing start to the New Year and that you are ready for the new opportunities it offers. Here is the first one: Abstract Submission for SIOP 2020 is open until April 1!