WHO Global Initiative for Childhood Cancer

In September 2018 WHO announced a new effort – the WHO Global Initiative on Childhood Cancer – with the aim of reaching at least a 60% survival rate for children with cancer by 2030, thereby saving an additional one million lives. This new target represents a doubling of the global cure rate for children with cancer. The aims of the Initiative are two-fold: to increase prioritization of childhood cancer through awareness raising at global and national levels and to expand the capacity of countries to deliver best practice in childhood cancer care. Concretely, WHO will support governments to assess current capacities in cancer diagnosis and treatment including the availability of medicines and technologies; set and cost priority cancer diagnosis and treatment programs; and integrate childhood cancer into national strategies, health benefits packages and social insurance schemes.

The initiative is creating a WHO technical package to help scale-up capacities within national health systems, to be achieved with support from a host of partners. Among them are SIOP and the St. Jude Children’s Research Hospital in the United States, the first WHO Collaborating Centre on childhood cancer, which has committed US$ 15,000,000 to support implementation of the initiative. The WHO Global Initiative on Childhood Cancer should be considered as a landmark event for children/adolescents with cancer and their families.

On behalf of the Childhood Cancer team at PAHO and the support of the GICC in Latin American and the Caribbean is developed a brochure in Spanish (and soon in Portuguese) of the CUREAll framework and the implementation of the GICC in the region of the Americas and included the SIOP logo on it in the acknowledgments, see here

The actions so far have included setting up working groups to develop WHO technical packages and ad hoc promoted workshops in selected countries of the world. SIOP is contributing to the success of this initiative by providing the expertise and knowledge of its members (mostly PODC representatives), in the abovementioned WHO GICC working groups (now concluded) and international workshops.

So far, as part of the process of deploying the GICC, workshops have been organised in Myanmar and Peru. In brief, Rashmi Dalvi , current SIOP Continental President for Asia, designated Ramandeep Arora to attend the Myanmar WHO Workshop which took place on May 8th (Yangon) & May 9th (Nay Pyi Taw) 2019 along with Pernilla Pergert (SIOP nursing representative to the Scientific Committee).

Lilianna Vasquéz, who is Peruvian and SIOP YI board member and Julia Challinor, SIOP Advocacy Officer attended the June 7th WHO Workshop in Peru. Further workshops have been held in Uzbekistan, Ghana (led by Lorna Renner, past SIOP Continental President Africa), and the Philippines .

Michael Sullivan (Continental President Oceania) has been officialy announced as the SIOP representative/ambassador and lead contact on the GCCI.

The WHO GICC should be considered for children/adolescents with cancer and their families as a landmark event In fact, for the first time, a worldwide framework has been finally created for channelling the wide range of action to promote the survival rate of children/adolescents with cancer and is animated by multiple “subjects” in multiple countries of the world. This is a major success, and SIOP has to take a great part of the credit for this success.

We would like to thank all your members for their tireless contributions to the GCCI on the various working groups!

The Global Initiative for Childhood Cancer Overview document presents the CureAll approach to support governments, partners and communities achieve the best possible cancer care for all children. This approach, summarized as four pillars of action supported by three enablers, will improve the care for children with cancer around the world.

The Initiative brings together stakeholders from around the world and across sectors with the joint goal of increasing the survival rate at least by 60% by 2030 while reducing suffering and improving quality of life for children with cancer globally.

This Overview document reminds us: if we act now, “All hands in”, we can save one million lives over the next decade. 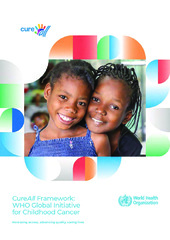